Top partners and supporters of DocStop handed over a petition to State Secretary Dorothee Bär on the evening of the celebrations for the admission of Heidi Senger-Weiss to the Logistics Hall of Fame at the Federal Ministry of Transport in Berlin. 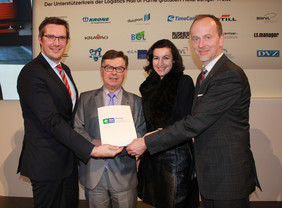 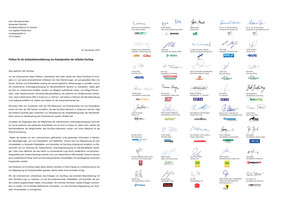 40 Top managers and board members of companies and associations from the entire transport and commercial vehicle sector wrote to the Minister of Transport, Alexander Dobrindt, personally and on behalf of their respective institutions, to ensure that in future a clearly visible DocStop reference can be attached to motorway signposts for truck stops and service stations. Numerous rest areas and truck stops along German motorways are already registered as DocStop partners and can provide a nearby doctor to truck and coach drivers with illness or pain."The fact that the DocStop logo on the highway signposts would point to the possibility of medical assistance at the resting-place, recognisable even for foreign drivers, would be a contribution to improve working conditions and, above all, to improve traffic safety," explains DocStop initiator Rainer Bernickel. "Only drivers who are treated in time for health problems are also safe drivers." Today, the DocStop network already comprises more than 700 doctors, clinics and partners all over Germany. DocStop organizations are also being set up in Austria, Poland, Denmark and the Netherlands.Marcel Frings, Chief Representative of TimoCom, Adalbert Wandt, President of the Federal Association of Road Transport Logistics and Disposal (BGL) and Dr. Frank Albers, Krone Sales Director of Germany (from the left), presented the petition on behalf of all 40 signatories to the State Secretary at the Federal Ministry of Transport, Dorothee Bär. The latter agreed to pass on the concerns of the DocStop supporters to the minister. Already in the run-up, other supporters with personal letters had already turned to the minister to underline the demand for a DocStop signposting on highway signposts. According to Ms. Bär, a positive opinion from the Ministry of Health is already in place.

The text of the petition can be downloaded here. (German)