With the assistance of the Münster Motorway Police, we present the legal consequences of drink-driving and appeal to ALL road users: DON´T DRINK AND DRIVE

Driving under the influence of alcohol has been one of the main causes of road traffic accidents for many years and is still often considered a trivial offence. The question of "residual alcohol" is rarely raised. The danger is quickly underestimated and everyone believes, following a boozy night or a party lasting into the small hours, that they can drive a vehicle without any problems after 3 hours' sleep.

This misapprehension is easy to clear up by way of an example.

Let's assume that, following a great party, one goes to bed with a blood alcohol level of 1.8 mg/ml and gets up again after sleeping for 5 hours. As an average value, we can say that a human body in the resting phase metabolises about 0.1 mg/ml per hour. In our example, this means that our sleeping person gets up and wants to drive to work, still with a residual blood alcohol level of 1.3 mg/ml. During the "metabolism phase", which he assumes is sufficient, he has metabolised just 0.5 mg/ml. That's much too little and is often underestimated. 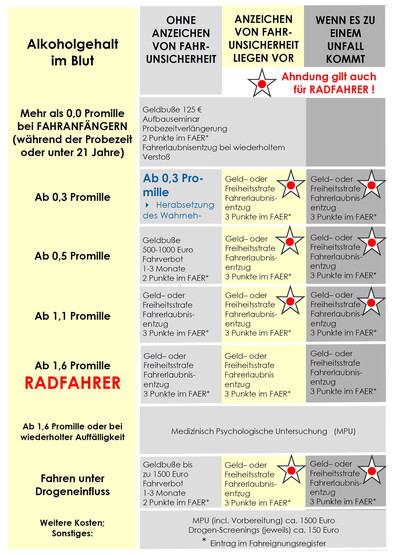 The effects of alcohol on the body

Delayed reactions, eyesight disorders and an increased readiness to take risks - all of these things can be fatal for drivers. 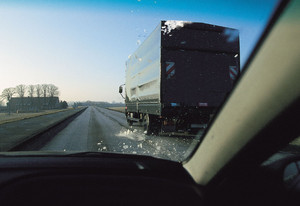 In winter, the occurrence of inconspicuous ice and snow accumulations on vehicle roofs is more likely than you think, and the risk of an accident increases a lot.

While the detection and removal of snow and ice on the a passenger car is not a problem, the same procedure considerably difficult at trucks. For the detection of snow and ice layers, especially when these have small thicknesses, it is indispensable within the framework of the departure control for the driver to convince himself before the start of the journey that there are no objects on the upperstructure and the roof of the driver's cab. 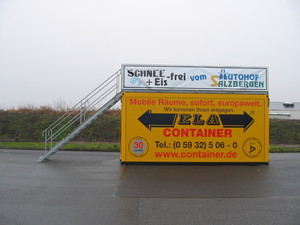 In any case, do not start the ride without prior checking.

Always remove dangerous "roof loads" such as snow and ice.

If possible, use a covered parking area.
When using a ladder to climb the vehicle body, the provisions of the employers' liability insurance association must be followed.
The commercial vehicle industry offers alternative technical aids - for example an airbag solution under the tarpaulin roof.
Please take advantage of the ice clearing sites offered throughout Germany. See a list of sites here: www.dvr.de 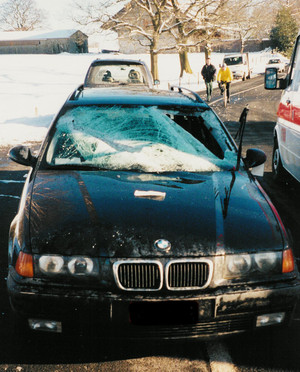 Every road user has to behave in such a way that no other person is harmed, endangered or more than is unavoidably hindered or harassed by the circumstances (§ 1 para. 2 StVO).

So: If a vehicle, whether it be a car, truck or trailer, loses snow or ice during the journey, it is already an administrative offense.

If persons are injured or even killed, the prosecutor initiates investigations within the meaning of § 229 (negligent bodily harm) or § 222 negligent killing) StGB.

According to §§ 31 i.V.m. 69a StVZO, a vehicle owner responsibility may apply.
The basic prerequisite for this is that the responsible owner must be aware of the condition of the vehicle and the vehicle must be within his access.

Under the occupational health and safety regulations, the employer is obliged to instruct his drivers.

Information on ice + snow in many European languages can be downloaded here as PDF:

Fit behind the steering wheel

Fit behind the steering wheel

Those who have to work at their upper stress limit – and that applies to all truck drivers – should do something to make their working day as stress-free and as well planned as possible. Several factors have to be considered here. In general, one should start one's working day well rested whenever it begins – regardless of whether early in the morning or in the evening. If a well-earned weekend lies before the start of work, one should take care not to drink any alcohol for at least 12 hours before starting work so as to avoid the dangerous and often underestimated residual alcohol phase. One should remember here that the body only metabolises about 0.1 mg/ml per hour while sleeping.

One can do more oneself to ensure a really good working day by considering the following points:

One second of unattentiveness at 80 kmh (50 mph) means 22 metres of "blind flying" that could end fatally.

You can find current information on the subject of the European Health Insurance Card here.
Download the current German Ministry of Health information sheet (German) HERE!

The European Health Insurance Card (EHIC for short) can be found on the rear side of the electronic health insurance card. It replaces the "E111 form" that used to be the norm in foreign countries and enables the insured person to get medical treatment unbureaucratically in European foreign countires.

The European Health Insurance Card has features that are uniform throughout Europe, such as the EU emblem and the layout of the text fields. This ensures that the card is recognised and can be used in all European member states.

Lights on during the day – safety takes priority

Lights on during the day – safety takes priority 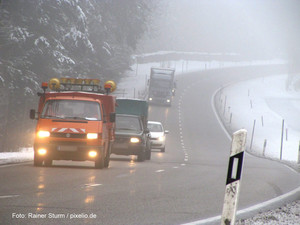 Seeing and being seen – at all times of the day and in all weathers – can save human lives. The recognisability of a vehicle is of great importance to all road users, especially in the winter months.

The so-called daytime running lights are ideal for being seen better by other road users. Since they may shine more brightly than dipped headlights, many experts estimate that they are more suitable than dipped headlights for the recognisability of a vehicle. In accordance with an EU regulation, it has been compulsory since 2011 for all new car models and since 2012 for all new truck models to be fitted with daytime running lights. The retrofitting of older models is also possible.

There is no fundamental duty to drive with lights on during the day in Germany, but it is recommended to always do so, because

Many European countries have long since realised that: Some, if not all, have long since made driving with lights on during the day compulsory. Dipped headlights have to be switched on during the day on all roads in Croatia and Moldova in the winter months. Use of lights during the day is only obligatory in Italy, Hungary, Romania and Russia outside towns and cities and on motorways. Daytime running lights may be used in the Scandinavian countries (with the exception of Norway) and Italy. No explicit regulations are known up to now for other countries with a light obligation. The ADAC recommends always driving there with dipped headlights for safety's sake.

We have included a list on the right showing the countries where daytime lights are compulsory and the fines that threaten if the rule is ignored.

Information from the Police 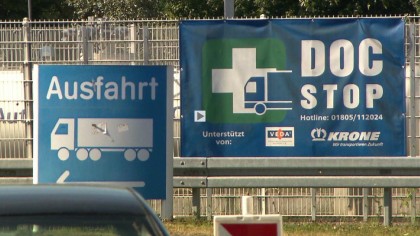